Trip to The Ismaili Jamatkhana in Burnaby 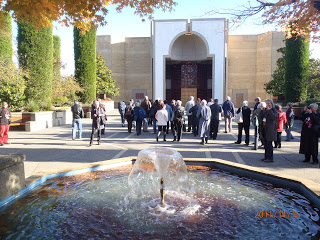 Mention the words Islam and Muslim to many in the street these days and their thoughts turn to Sharia Law condoning the cutting off of hands, suicide martyrs dreaming of virgin in paradise, raped women being stoned…and many more negative images.

Eight parishioners from St. Philip’s-by-the-Sea decided on Tuesday November 15th to accept the free invitation of Naz Rayani and Mona Goode from the Centre for Studies in Religion and Society (CSRS) at the University of Victoria to tour The Ismaili Jamatkhana and Centre in Burnaby. We sought the truth behind those stereotypes.

It was a dark and freezing morning shortly after six when I joined Susan Hayward-Brown, Margaret Foggett, Gillian Guy and Deirdra Love at the carved eagle sculpture in the Northfield Street parking lot. Yvonne Downey kindly drove us in her van to Duke Point for the 6.45am ferry where we were met by Caleb and Maureen Lawrence. Like a family out for a holiday, we were all in upbeat mood looking forward to learning from those who called their God Allah.

Naz, Mona and a busload of others from Victoria joined us on the other side and like giggling kids we boarded a school bus for the drive to Burnaby as darkness gave way to dawn followed by a perfect blue sky sunny morning. Mona struggled to keep upright in the aisle of the jerky bus as she introduced us to the origins of Islam.

Islam is one of the monotheistic faiths from the Abrahamic tradition, along with Christianity and Judaism. Followers of Islam are called Muslims. There are 1.4 billion Muslims worldwide and their numbers are increasing. As the Bible is the holy book of Christians, so is the Quran the holy book of Muslims, a book revealed to the Prophet Muhammad by the Angel Gabriel in Mecca and Medina over a period of 23 years in the 6th century AD. Muslims believe in Jesus as a great prophet and his virgin birth a miracle but not his resurrection.

After the death of Muhammad, Muslims disagreed and the people divided into two groups: the Sunni and the Shia. Mona likened the Sunni to the more conservative Catholics and the Shia to the more liberal Protestants. We would be hosted by the Ismailis who belong to the Shia branch of Islam. Shias believe in the spiritual leadership of Imams, directly descended from the progeny of Muhammad. The current Imam of the Ismaili Muslims is His Highness Prince Karim Aga Khan. An avid royalty watcher, I had heard much of the Aga Khan as a celebrity. Now I was to see him as a philanthropist.

In the 1960s and 1970s, the Ismaili Shias fled from the bloody dictatorship of Idi Amin in Uganda and were welcomed to Canada. Unused to Montreal winters, they fled again, this time west to British Columbia. Now, Mona smiled, many have gone east again, beyond Montreal to the Maritimes.

The Ismailis are grateful to Canada and respect their neighbours. One sign of this was our entry into their building which the Aga Khan opened in 1985 in the presence of the Prime Minister of Canada. The Aga Khan said, “It is my very deep hope that it will become a symbol of a growing understanding in the West of the real meaning of Islam.”

I had expected some soaring multi-domed monolith surrounded by a vast parking lot and hundreds of men (not women), streaming out of their vehicles for five-times-a-day prayers in a traditional mosque. 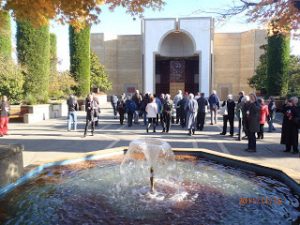 Instead, as our bus turned abruptly left off an inauspicious suburban  street, we almost slammed into the wall of a short driveway and were forced to make more tight turns and successive changes of forward and reverse gears before descending to the courtyard.

Yes, we looked up at an imposing three-storey rectangular block building in sandstone and concrete with a central portal of marble, but once inside the solid oak doors, we entered what one person called ‘a womb’. Winding stairs with concrete walls led still further down to administrative offices, a library, a resource centre, a council room, and classrooms where high school students came for Saturday ‘Sunday School.’ Lights were subdued and colours muted. Tapestries covered concrete. It was warm and quiet, peaceful and comfortable.  So low-key I nearly missed the sign to the bathroom.

Unlike cathedrals, this Ismaili Jamatkhana (meaning the house of the community) was designed not to soar but be sunken, humble and respectful of its neighbours. “We need to be together as friends and family and work together for a better world,” said Dr. Abdul Hassam who addressed us at lunch in the social hall on the third floor. “Islam means peace and surrender. You get peace when you surrender or submit to Allah intelligently and through your own free will. Islam guides all aspects of one’s life. Islam is pluralistic, it accepts all other religions.”

So far, nothing resembled the Islam as portrayed by the nightly news. I wish the terrorists were listening. In the prayer hall, a vast open space where 1200 people could assemble, I am sure I saw a cross in the geometrical tracery that embroidered the windows. I didn’t ask. I hoped.

The welcome brochure read: “Jamatkhanas are meant to play an ambassadorial role in terms of the designs inspired by Islamic architecture, symbolizing the presence of the Ismaili Muslims as proponents of peace, prosperity, interfaith harmony and a pluralistic approach to society.” The Aga Khan said, “From (this building) should come forth those thoughts, those sentiments, those attitudes, which bind men together and which unite.” I wished. I prayed.

There was much to learn. All tapestries have one obvious flaw because only Allah is flawless. The Ismailis bow to modern living and calls to prayer come not five but three times a day. Most come Fridays for prayer but there are twice daily gatherings.  Meditation  between 4am and 5am; prayers at 7.30pm. I wish that we Christians could attract such dedication.

On the third floor after lunch in the social multifunctional room, Dr. Hassam demonstrated charity, the fifth pillar of Islam, by outlining the worldwide work of the Aga Khan Development Network which is dedicated to improving living conditions and opportunities for the poor, without regard to their faith, origin or gender.

“We go where governments don’t go. We don’t dictate. We provide opportunities, give people the capacity to become independent. We set goals, give training. ” As an example, he cited Kenya where 20,000 farmers set aside part of their land to grow green beans which are now sold to France and where, by the way, the Aga Khan now lives. Another was the provision of a cell phone service in Afghanistan.

It was dark again when we from St. Phillip’s  boarded the ferry at Tswassen for the return ride to Duke Point and Nanaimo. I asked my companions to give me the first thing they remembered from our day at the Ismaili Jamatkhana.

Caleb: “In the media Islam is regarded with fear and anxiety. Moslems appear entirely opposed to Christianity. It was good to know that though the Sunnis are more rigid, the Shias are more open, liberal and adaptable.”

Deirdra: “Intuition favours the informed mind. We have more in common with liberal Muslims than conservative Christians.”

Gillian: “I learned there’s another face to Islam but I would have liked to have more time in the prayer hall for prayer and meditation.”

Margaret:” I learned how much alike we are. It all comes back to Love One Another.”

Maureen: “I was impressed with the commonalities between the Aga Khan Network and the Primates World Relief Development  Fund.”

Yvonne: “The nice geometric designs on the floor of the courtyard, in the tapestries and on the windows. The humility of the Ismailis towards their neighbours.”

Lyn: “I felt the same way about the respect these Muslims show to peoples of other cultures and beliefs, and I was amazed at the vast amounts of money they are able to raise with the Aga Khan Development Network. I read that Naz Rayani, our host today, organized the World Partnership Walk in Victoria from 1995 to 2010. This is said to be Canada’s largest annual event to do such fund raising to fight global poverty.  In 2010 nearly 40,000 Canadians came together in ten cities to raise close to $6 million. When Naz was introduced as ‘a walking miracle’ by Dr. Hassam, I think it was a tribute to his organization of the Walk as well as his recent recovery from a stroke. And I like the fact that he regularly organizes these day trips to the Jamatkhana to give non Muslims a view into the Muslim world.”

The day had been perfect – the weather, the camaraderie between us and the Muslims, and our own camaraderie. God – and Allah would surely be pleased.