Over Victoria Falls – Or Not? 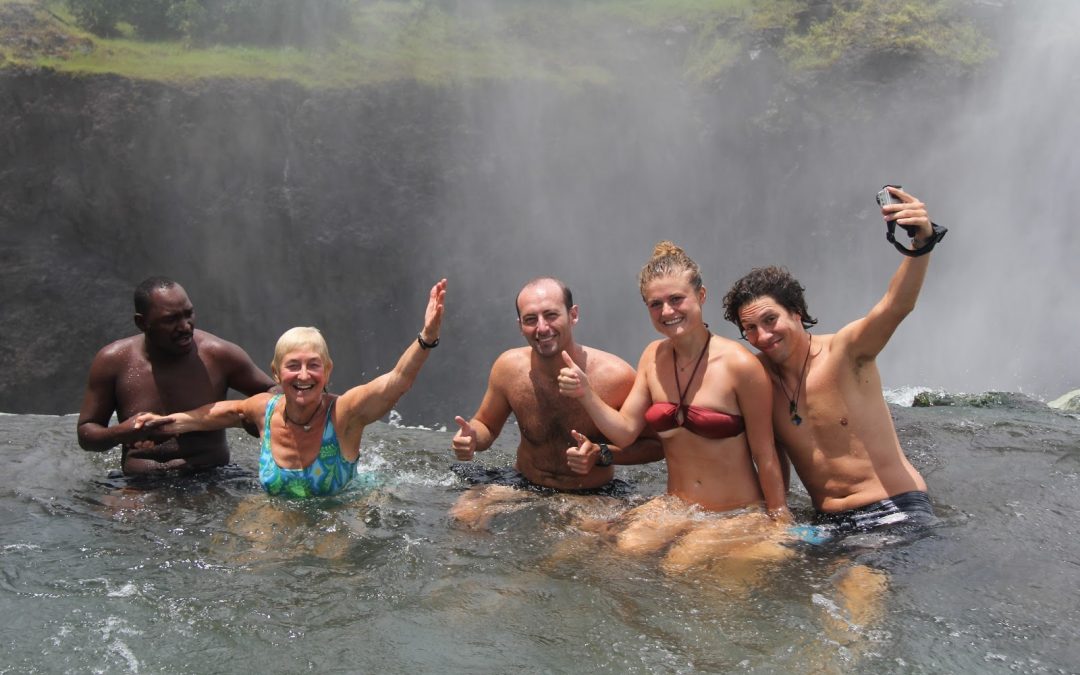 “Lyn, relax. Raise your arms and smile at the camera. I’m your guide. I’m here to make sure you don’t go over. “

Hard to relax when just inches behind you the powerful Zambezi River is pouring its enormous heart over a 300-foot vertical drop. I am sitting on the lip of the famous Victoria Falls in Zambia, Central Africa – scared and clinging to Alex, my guide. Sharing the narrow ledge with me are my companions, linking arms and laughing.

I try to straighten up for the picture that our other African guide is taking for us from his also impossible position
standing in a few inches of water on the same lip of the falls but my fear of heights is not helping my composure.

Why are we not getting washed over the edge? Alex explains. “About 20 years ago, a fisherman who used to fish here a lot lost some of his fish so he dived into what we call the Devil’s Hole here and found that it was about five metres deep and under the lip was a rock wall which you are sitting on.” 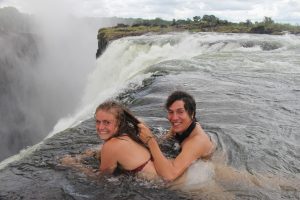 Yes, getting to that rock wall was the easy part. Not that our path to the Devil’s Hole was without challenges. First we had to get out of Zimbabwe and into Zambia and NOT get our passports stamped, otherwise we would be payng for expensive visas on our return. And being a Canadian I had to pay more for my visas than anyone else in my group. I am a dual citizen of Canada and Australia but I am travelling on my Canadian passport so I had to pay at least $50 more than the Aussies, the Irish, the Italians, and even more than the Japanese!! Why? I thought that Canada had a good reputation with the rest of the world. Well, we persuaded the border officials to give us a $20 day pass to cross the bridge linking
Zim to Zam (will be legal next year I was told by the information officers in Zim the day before and it had been legal in previous years).

Over the border, we got a taxi to the Royal Livingston Hotel, an illustrious symbol of British colonialism, that is one of the world’s top ten hotels, according to their list of awards. We revelled in its luxury while waiting an hour for the next boat for the five minute cruise to Livingston Island, the nearest island in the Zambesi River before it pours over the drop. Decades before on my last visit I had been chased by an elephant close to this island while on a motor boat cruise of this island-dotted river. Livingston Island was where the famous explorer David Livingston saw the Victoria Falls for the first time. But he didn’t know about the Devil’s Pool!

Holding onto Alex’s arm, I negotiated the slippery pointed rocks to the part of the river we had to swim. A rope across on the falls side was supposed to keep us from swirling over the edge with the current and Alex made sure he swam beside me encouraging me onward and over to the foot-gashing rocks on the other side.

The next challenge was whether to dive into the pool or not to dive in. My companions jumped in immediately even doing aerial acrobats for the camera and were soon sitting on the underwater wall, grinning. I stepped down to a lower level, threw up my hands and took the plunge. Alex pulled me up to the lip but pictures show that I looked like a teetering coward leaning forward into the pool rather than proudly sitting upright.

I watched while the others turned around and looked over their edge and hammed for the cameras which didn’t show their legs behind being held by our guide.

Back on Livingston Island we celebrated our return from Devil’s Pool with breakfast of a uniquely formed Eggs Benedict and healthy tasty real bran muffins for the first time I had left home.