My Day at The Shi’a Ismaili Muslim Centre in Burnaby 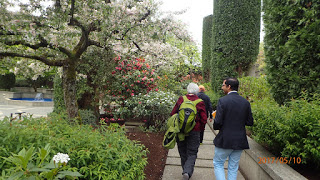 “We want to talk to each other, not talk about each other,” said Dr. Omar Kassam with a smile as he welcomed us after lunch in the spacious Social Hall at the Shi’a Ismaili Muslim Centre in Burnaby on May 10, 2017. He had left his patients that day to volunteer to be our keynote speaker. Everybody in this Shi’a community is a volunteer from the Director of the Muslim Council to the volunteer who shines the railings of the Inner Minaret.

I had taken the Duke Point ferry to the Tswassen terminal to join my table mates arriving from the Victoria ferry. We were a jolly lot, ordinary people from all walks of life, people interested in helping people, such as one lady from the Compassionate Warehouse which fills a container load of supplies each year for needy places around the world. Our host, Naz Rayani, a sprightly little man from Uganda with a smiley face, gave us our name badges and led us to the big yellow bus which would take us to the Centre. I was surprised to find a friend of mine, a fellow kayaker who had just moved from Nanaimo to Victoria and even more surprised to find out that she had been invited by Naz who was in her jazzercise class.

Muslim men in jazzercise class? Forget your stereotypic Muslim. Forget for awhile jihadists, terrorists, extremists.  Forget the barbaric reputation of Sharia Law. “Hijabs and beards don’t make you a Muslim,” Omar said. “There are about 1.4 billion Muslims worldwide and there are many different interpretations of what it means to be a Muslim. Just two laws are important to Muslims. There is one God, Allah, and Mohammed is His Messenger.” They believe that their Bible, the Quran, was revealed to them by the Prophet Mohammed. They believe that Jesus was also a prophet.

I was surprised to hear Omar say that the Quran is the first book to emphasize women rights and that i devotes more words (even chapters) to Mary, the Mother of Jesus than our Christian Bible.  I was also surprised to learn that women and men pray together in the same spacious Prayer Hall at the top of the Centre though he smiled as he added, “Now it can be pretty distracting if you have a lady right beside you while you are trying to concentrate on  your prayers!” Women at the Ismaili Centre hold key positions at all levels.

I was also surprised when he said, “If you can educate only one in a family, a son or a daughter, educate the daughter.” I thought of Malala, a now famous Muslim girl from Pakistan, who after being shot by the Taliban for going to school, survived, and now dedicates her life to education for all women everywhere.

Omar added, “The mark of a Muslim is not about covering your face and the length of your beard. It is about education, ethics, generosity, benevolence, hospitality, and wonder. Ismail values are Canadian values. We are proud Canadians.”

Most of the Shia Ismailis came to Canada in the 1970s, fleeing persecution in Idi Amin’s  Uganda. Their spiritual leader, the Aga Khan, a direct descendant of Mohammed, saw Canada as a country of tolerance and pluralism. He wants Canadians to see Ismaili Muslims as tolerant and pluralistic as well. At the Centre’s foundation ceremony in 1982, the Aga Khan said, “It is my very deep hope that this Centre will become a symbol of a growing understanding in the West of the real meaning of Islam.” Go to Google for two more pertinent Aga Khan speeches, one to the Canadian parliament and another to Peter Mansbridge of CBC News.

Omar concedes that with 1.4 billion Muslims in the world there are many interpretations of the Muslim religion but that only a very, very small percentage of the Muslim world is centred on politics and terrorism.The Aga Khan addressed the current problems in these conflicts in his 2014 interview with Peter Mansbridge.

“We cannot let this uncivilized world continue like this. We have to understand the factors in each country of crisis and conflict that cause this global problem.  We have to help them move forward, to accept pluralism, to reduce fear, stop the violence. We have to give people hope that the quality of their lives will improve.”

We listened to our speakers at lunch in the Social Hall. On the walls was the message “We can Change the World One Step at a Time”. On the screen was the scope and amount of money being spent in 2016 to reduce poverty by the Aga Khan Development Network. If I remember correctly, 7.4 million dollars were spent in 10 different countries to reduce poverty in 2016.

But it wasn’t just the good work that the Ismaili Muslims are striving to do in the world that we learned. We were lucky to literally bump into Bruno Freschi, the famous Vancouver architect who designed the Ismaili Jamat Khana, the Ismaili house of the community where we were spending the day. Bruno also designed Simon Fraser University and Expo 1986. He was at the Jamat Khana today as a continuing consultant for the Centre’s renovations.

He and the volunteer guide who greeted us as we entered the peaceful garden courtyard pointed out how Islamic traditions and modern Canadian elements were combined in the construction. Geometric patterns on floors and windows, water flowing peacefully around cedar trees reminiscent of minarets, glass walls that inspired a feeling of space and light, prayer mats hung on the walls like tapestries with intentional imperfections emphasized that only God was perfect. Bruno pointed out the many intentional angles of corridors and windows. 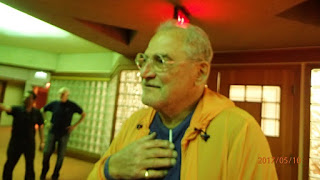 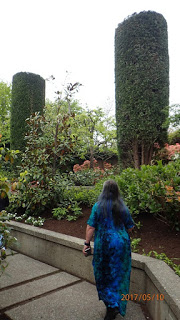 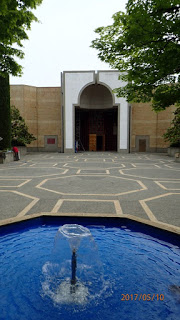 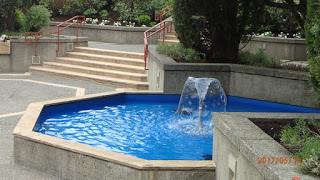 As we walked over the octagon-shaped patterns of the courtyard, under the great arch and through the ornate doorway to look up to the great dome, our guide told us that “This place is designed for you to go in to go out, to make you wonder, to take you from the material world to the spiritual world. It is built tall, you feel so small.” From the administrative level – the offices, the libraries, the classrooms – we climbed to the social hall then higher to the vast Prayer Hall.

It is expected that all who go into the Ismaili Centre will go out as ambassadors for God, for Allah. In this same ambassadorial spirit, more Ismaili Centres are currently being built in Toronto, Dubai, and Tajikistan. In the words of the Aga Khan, they are to be places of congregation, of order, of peace, of prayer, of hope, of humility, of brotherhood. From them should come forth those thoughts, those sentiments, those attitudes, which bind men together and which unite.”