MY BACKYARD EAGLES HAVE FLOWN 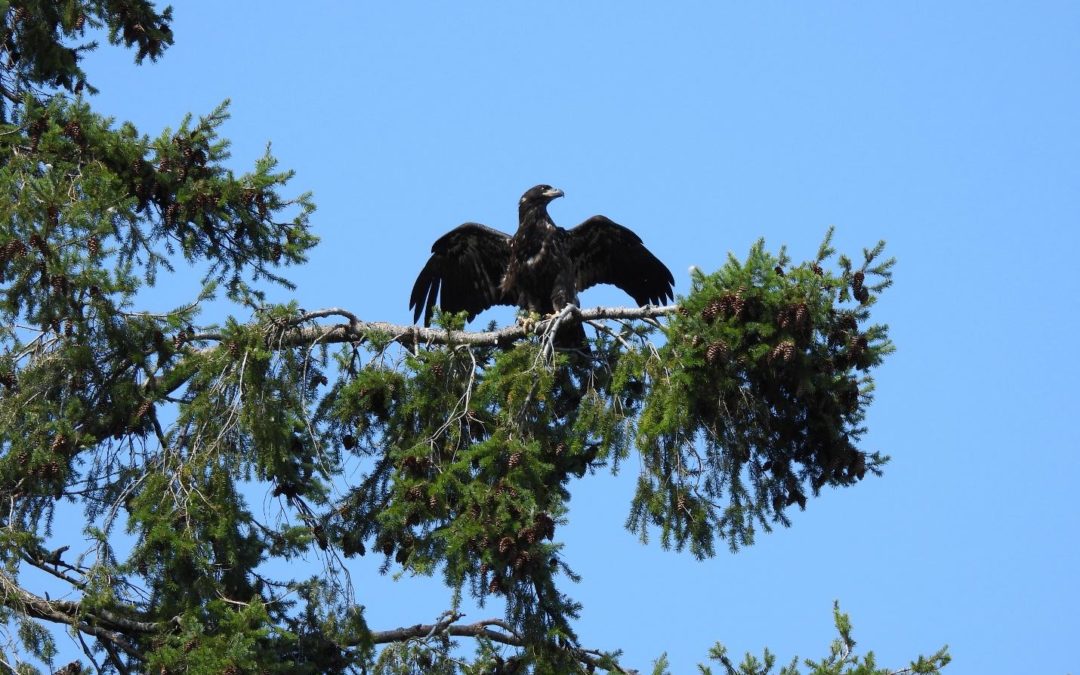 Well, it is later than usual, says former husband, eagle man, David Hancock, but the bald eagles who have been nesting in my backyard now for nine years have finally flown the coop and presumably headed north towards Alaska. David said that last year one of the eaglets he tracked last year flew from her Zero Avenue (Surrey BC) nest to the mouth of the Stikine River in Alaska – in 2 days! Incredible. And migrating nestlings are not accompanied by their parents. The adults fly north too but not with their chicks.

As readers of my first book THERE’S A SEAL IN MY SLEEPING BAG know, I got my interest in bald eagles on my first date with David Hancock when I was about to board a boat from Vancouver across the other side of the world to my birthplace in Fremantle, Western Australia. He picked me up in a coffee shop.

“Fly with me to Barkley Sound on the west coast of Vancouver Island in my private float plane and help me count bald eagles,” he said. At that time I didn’t know an eagle from a parrot (a bit of an exaggeration!) but thinking it could be the last exciting thing I did in my life before I ended my world travels and settled down to lecturing student teachers in speech and drama, I cancelled another float plane offer and accepted David Hancock’s proposal instead. (Unbelievable coincidences have always played a big part in my (mis)adventurous life).

My job was to record where and what the eagles were doing on the worst weather day the pilot had experienced. And then at a particularly bumpy moment, David shouted above the noisy engine, “You are the first person I have taken up in this float plane that didn’t get sick. You Aussie girls are tough. Marry me.”

And so I did. I cancelled the boat, booked a big plane, and sent a telegram to Mum and Dad- “Flying home. Please prepare a wedding for next Saturday.” David had to get back to university.

My first wedding gift delivered to the church on a bright red bath towel as the gift of the local vet who read our story in the local paper was an Aussie wedge-tailed eagle and my first job was to help get it and an Aussie falcon back to Canada. We had all the necessary permits but not the style of transportation which David said was best for the falcon. The Aussie eagle took a boat ride but I had to smuggle the Aussie falcon in my fashionable raffia handbag. You can read that drama in my second book THERE’S A RACCOON IN MY PARKA.

After almost 50 years, bald eagles are now back in my life. For the past eight years, the pair in my backyard have been raising chicks in a nest that I can see from my kitchen.

Well that’s a typically long introduction to the story of this year’s chick and its recent departure in mid August from my backyard nest.  When the single chick this year spent several days and nights alone in the nest squealing nonstop for food and seemed to be abandoned by its parents, I wrote to David.

He replied. “The challenge is not simple. Normally the adults abandon the chicks after about 5-10 days. The adults fly north without them. The chicks then 4 or 5 days later usually follow. They get very hungry in the meantime. However, dropping a pound makes flying easier as they work their way north. One of our eagles (the David Hancock Wildlife Foundation) carrying a tracker last year flew from her Zero Avenue (Surrey) home to the mouth of the Stikine River in Alaska -in 2 days!

“Is yours about to do this? Who knows? Did one or both parents get killed before they left? Who knows? THIS HAS BEEN A TERRIBLE YEAR FOR CHICK SURVIVAL – at least here on the mainland it was not as bad as on Vancouver Island.”

During the next few days the parent birds returned to the nest for short visits – along with noisy gangs of crows and vultures who had been kept at bay when the adults were actively nesting. To my relief the chick was silent. I do not know if the parents brought fish.

David writes that this year 2022 has been a terrible year for chick survival but not as bad on Vancouver Island as it has been on the mainland where he lives.

As I write, it is a week later and there are no eagles at the nest tree, just noisy crows and a few vultures.

Alas the nest in the fork of the tree is almost gone. Only a few loose sticks remain. I wonder if the parents will return sometime this fall to make a new one.

I remember my lucky day a few years ago – Hallowe’en Day – when I was sitting in my kitchen and one of the then nesting eagles flew right by my window with a long stick of broom in its talons. I grabbed my little camera and snapped off a surprisingly clear picture of my Hallowe’en Witch on her Broomstick. Stay tuned till the same time this year to see if the adults return from their northern fishing rivers to build a new nest. I can only hope and pray.