Memories of Sam: The Cape Fur Seal Colony of Cape Cross near Swakopmund in Namibia 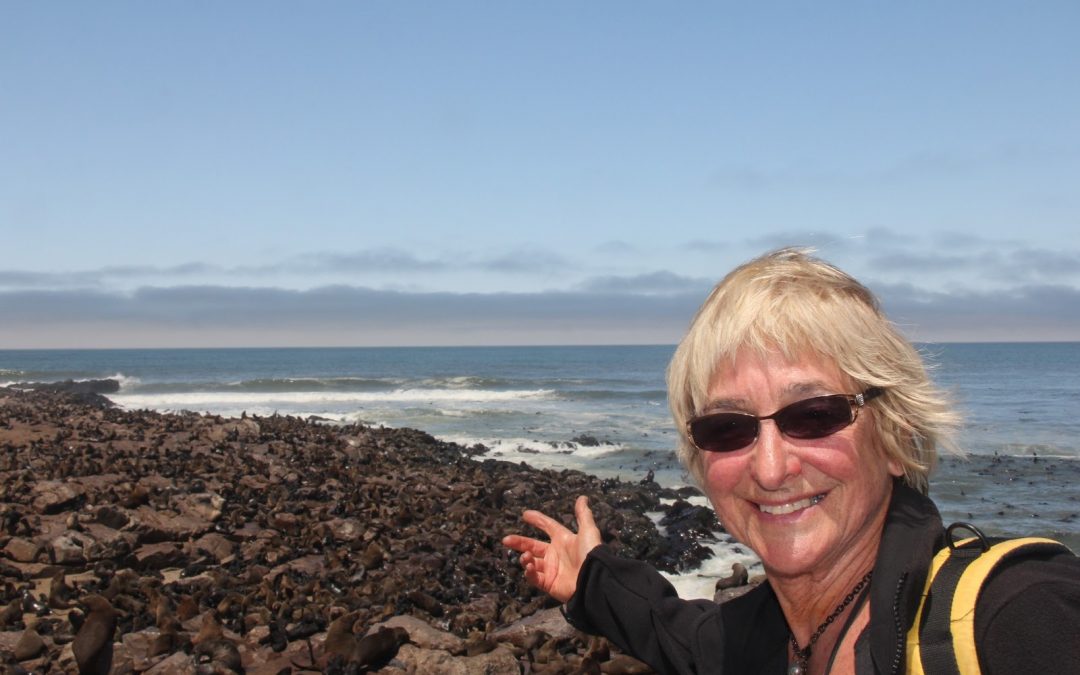 After long days driving through the desert in Namib Naukluft Park including my challenging climb up the narrow pointed 600 foot slip face (think of a steep triangle) of famous Dune 45, we reached the Atlantic Ocean at the once German town of Swakopmund. It is called a  Paradise of the Sea but my personal paradise is the Cape Fur Seal colony about 100 km to the north.

This was much better than my last visit to a breeding fur seal colony on the Pribilof Islands between Russia and Alaska to see where Sam my first animal orphan was born. You can read about that in my book Looking for the Wild.  In Namibia you walk along a long boardwalk which parallels the congested beaches in between picturesque rocks and backgrounded by a heaving ocean and you can see seals anytime in the year. 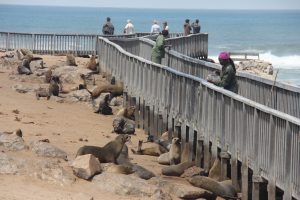 It was a cacophony of sound -unceasing roars, growls, barks from the adults; plaintive yelps and wails from the newborn pups; a kaleidoscope of colour – majestic grey brown bulls, olive cows, black sausage pups, and offshore massive white surf smashing on to what little you could see of beaches. 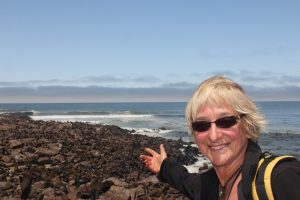 I can give only highlights here as so little opportunity to find time and place to write on a bus camping trip along the back roads from Cape to Cairo. Here are some:

Adults jostling noisily under the boardwalk, pups lying on top of each other like black meringues, mothers squabbling with other mothers to protect their newborns, all seeking shade from the noon day sun now that the grey sea fog has retreated. My favourite image is of mothers
trundling up from the beach to collect their pups old enough to strike out on their own to find the shady place beneath the boardwalk or who just want to join their mates. Females grabbing their offspring by the back of their necks and swinging them like lifeless ragged dolls from side to side as they return them to the milling throngs closer to the beach. |Pups wailing in protest as they are dropped, nipped and picked up again. I have difficulty focussing on the brief time I can see the pups between swings. I am trying to catch their golf ball eyes, their open mouths, their hanging red tongues. They were the size of Sam, my Alaskan fur seal when he washed ashore on Vancouver Island, reduced to birth weight through sickness on the annual migration. I wanted to help them too. 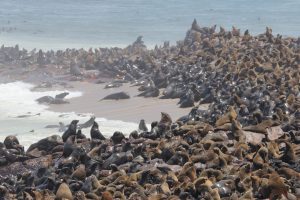 Other seals struck poses on top of rocks like statues – noses pointed high, front flippers splayed out sideways, back flippers upturned in the air – the only way to eliminate the midday heat of near December. Finding rocks was the only way to stay out of the scrum.

An hour was not long enough. My companions had returned to the bus. I finished my visit by filming a pup trying noisily to find its mother’s nipple for a noon snack. It scratched the fur below her chin, she paid no attention; it wailed, no response; it tried to climb over the rock she was sitting on to no avail, the mother made no attempt to aid her offspring. The pup gave up the search and waddled over to join the pile of other pups. The mother called and the pup returned. Finally, but without any aid from her mum, she found a nipple and began sucking. 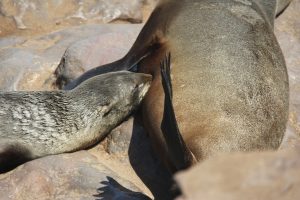 I hurried back along the boardwalk, past the more solitary seals who splotched the sand by the parking lot, and got to the truck – late. My excitement remained for the rest of the day.