Meeting The Locals in Malawi 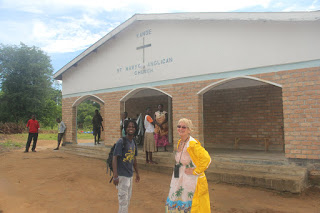 As well as chilling out on the beach of Lake Malawi in what was called Nyasaland in 1960, my trip notes said to be sure to hang out with the locals as they are the friendliest people in Africa. Malawi, the new name of the country which got its independence in 1964, is also dubbed the Warm Heart of Africa and Africa for Beginners.

I made my connections within minutes of arriving at our camp site at Kande Beach. Malawian men were on the sand touting possible activities for the next day, the last Sunday before Christmas. Scuba Diving, Snorkelling, Village Walk, Horse Riding. My ears pricked up the totally unexpected word, Church. “Count me in,”I told the young African man who called himself Cheese on Toast. Perhaps it is their sense of fun but later I was to meet Hangover, Mr 100, and Sex – something or other. “I’ll pick you up at the gate tomorrow at 8.15am for the service at 9am. It’ll take more than half an hour to get there ,”said colourful Cheese on Toast. “Meanwhile, would you like to go my friend’s wedding?.”

I don’t think I’d yet put up my tent but my answer was a resounding yes, through his village, back to the highway, through the roadside stalls and onto a huge open field that was probably a sports field on other days. On this day it seemed the whole village of 4500 people had gathered to celebrate a wedding. Earlier in the day, the bride and groom had said their vows in the Anglican Church (they were Pentecostals), enjoyed a big meal with their relatives and close friends who had supplied the food, and now were receiving the whole village. 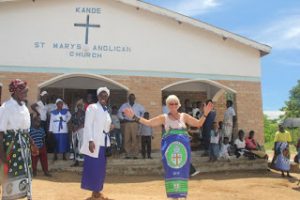 People were dancing (shaking) in the centre of the field but others in twos and threes were shaking their way up to the bride and groom, dressed in formal western attire, the bride in a long white gown with a long white train, the groom is a metallic grey suit, who were sitting under a white canopy., So? The difference was that everyone was throwing paper money up into the air as gifts to the newly weds, 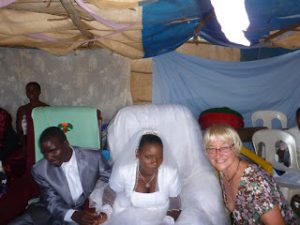 I danced up to the bride and groom with everybody else and borrowed money from newly met Cheese on Toast. The master of protocol took pictures with my camera. Then I took pictures of the couple presenting wedding cake to their immediate families in front of the canopy. For the next hour or so till the arduous journey back to camp in the dark by the village trail I shook with the most colourful ladies while Cheese on Toast took pictures. I had to keep borrowing money from my new guide and the master of ceremonies. A lady, probably a relative, walked around the field picking up the notes as they were thrown with abandon and collected them in a big wicker platter.

By the time I left Cheese on Toast at the gate to the private beach campground, we had arranged a full day ahead even though his main wish was to sell some of his paintings. We were to do church, then a paddle in his aging dugout canoe and his sister did my washing. That’s for starters. I certainly connected with the locals.